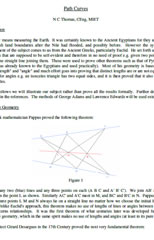 Introduction. Geometry means measuring the Earth. It was certainly known to the Ancient Egyptians for they used it to reestablish land boundaries after the Nile had flooded, and possibly before. However the systematic development of the subject comes to us from the Ancient Greeks, particularly Euclid. He set forth a number of axioms that are supposed to be selfevident and therefore in no need of proof e.g. given two points then there is one straight line joining them. These were used to prove other theorems such as that of Pythagoras (which was already known to the Egyptians and used practically). Most of his geometry is based on the notions "length" and "angle" and much effort goes into proving that distinct lengths are or are not equal, and likewise for angles e.g. an isosceles triangle has two equal sides, and it is then proved that it also has two equal angles. ...