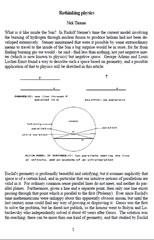 What is it like inside the Sun? In Rudolf Steiner's time the current model involving the burning of hydrogen through nuclear fusion to produce helium had not been developed extensively. Steiner maintained that were it possible by some extraordinary means to travel to the inside of the Sun a big surprise would be in store, for far from finding burning gas we would - he said - find less than nothing, not just negative matter (which is now known to physics) but negative space. George Adams and Louis Locher-Ernst found a way to describe such a space based on geometry, and a possible application of that to physics will be sketched in this article. ...