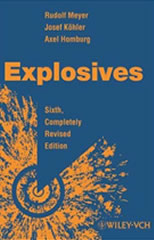 Preface. The sixth English edition of “Explosives” which is now available can look back over a history of 30 years since it was first published. On the initiative of its main author Dr. Rudolf Meyer (who regrettably died in 2000), the first copy of the German version of “Explosivstoffe”, which had become known far beyond the borders of German-speaking countries, was first translated in 1977. It was also Dr. Rudolf Meyer, who in 1961, in his function of Technical Director of the German company WASAG Chemie AG, gave new impetus to the company brochure to achieve its present form. The preparation of all the current German and English editions have a closely-knit history with the Fraunhofer Institut für chemische Technologie (ICT, formerly the Institut für Chemie der Treib- und Explosivstoffe with its head offices in Pfinztal/Berghausen near Karlsruhe, Germany. This institute was initially founded by Dr. Karl Meyer, Dr. Rudolf Meyer’s elder brother in 1957, as part of the Technische Hochschule, Karlsruhe, and was extended later on. We regret to say that while this sixth edition was under preparation, the Assistant Technical Director of ICT, Dr. Fred Volk, (1930–2005) passed away. Immediately after obtaining his doctorate in chemistry in 1960, Dr. Fred Volk joined the ICT, which had then just been built in Pfinztal, where he worked closely with Dr. Karl Meyer. The main focus of his research within the area of explosive analysis was on the use of thinlayer chromatography and mass spectrometry as well as on calculating thermodynamic energies used in explosive and combustion processes. The many key words and the related articles in “Explosives” dealing with theoretical and thermodynamic performances were painstakingly checked, or written by Dr. F. Volk himself, each time before a new edition was printed. As an addition to the previous edition of “Explosives”, this book includes even more information on new explosive formulations. Dr. Alfred Kappl has provided information and text materials on Fuel Air and Thermobaric explosives, and Dr. Robert Bickes (Sandia National Labs, USA) has contributed an article about Semiconductor Bridge Igniters (SCB). The special department II.3 (Dr. Thomas Lehmann, Dr. Silke Schwarz and Dr. Dietrich Eckhardt) of the Deutsche Bundesanstalt für Materialforschung und -prüfung (German Federal Institute for Material Testing and Research, BAM) has also contributed important notes and references on the subjects of hazardous substances and testing procedures. ...