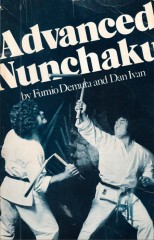 Fumio Demura, 5th-dan, was born in Yokohama, Japan. He began his martial arts training with kendo and later studied aikido and judo. While at Nihon University in Tokyo, he earned a bachelor of science degree in economics and, at the same time, developed a keen interest in kobu-do (the use of weapons such as the bo, the sai, the tonfa, the kama and the nunchaku) which he studied under the tutelage of Kenshin Taira and Ryusho Sakagami. Noted in Japan as an outstanding karateka, Demura won the All-Japan Karate Free-Style Tournament in 1961 and, for the three consecutive years from 1961 to 1964, he was among Japan's top eight players. His numerous tournament wins include the East Japan, the Shito-Ryu Annual and the Kanto District championships. Demura has also received the All-Japan Karate Federation President's trophy for outstanding tournament play and has been awarded certificates of recognition from Japanese Cabinet officials for his achievements in and contributions to the art of karate. He now directs the U.S. division of the Japan Karate Federation and serves as an advisor to the Pan-American Karate Association. In 1969, BLACK BELT Magazine's Hall of Fame honored Demura's dedication to karate by naming him Karate Sensei of the Year. In 1974, he received martial arts' Golden Fist award and, in 1975, was again honored by the BLACK BELT Hall of Fame, this time as their Martial Artist of the Year. Demura's first book, SHITO-RYU KARATE, was published in 1971. His three later books, NUNCHAKU, Karate Weapon of SelfDefense; SAl, Karate Weapon of Self-Defense and BO, Karate Weapon of Self-Defense, each introduce a weapon of kobu-do. ...