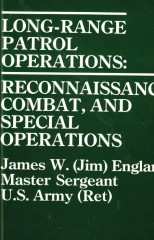 Long Range Patrol (LRP), or Long Range Reconnaissance Patrol (LRRP), pronounced "LURP": The LRP is a military unit specially organized, equipped, and trained to function as an information-gathering unit responsive to the intelligence requirements of the battlefield commander. It has the ability to perform limited direct combat operations against enemy forces and/or targets. The LRP consists of highly trained and motivated members qualified to perform reconnaissance, surveillance, and target acquisition, and engagement operations within the controlling or supported unit's area of interest or influence. The LRP element is employed as either a "deep penetration" force, or for extended duration missions, or both. The LRP relies on small size, stealth, and superior training either to avoid contact with the enemy or to defeat a superior enemy force through short-duration violent action. ...