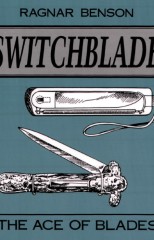 When we were young, my brothers and I often engaged in a bit of whimsy. We risked nothing but our ideas, and the game often went on for days. What, we liked to speculate, would be the deadliest weapon we could ever hope to own and use? Perhaps because our scope was limited by the realities of life as farm boys, we did not think it appropriate to include such things as F-4s, aircraft carriers, or tactical nuclear weapons. Besides violating our sense of fair play, these were not, in our minds, weapons we might someday really use, much less own. Although we searched diligently for other answers, our first choice invariably was a totally silent, totally reliable submachine gun. Close second, we felt, was always a switchblade knife. At the time, we were too young and inexperienced to realize that the concept of a totally reliable, totally silenced submachine gun was a myth. On the other hand, switchblade knives were real. Each of us carried one. They were sold in general stores off of cards, much like Bic lighters today. We felt that, in an emergency, no better knife existed. Real emergencies test one's tools. In our experience nothing deadlier, nothing more easily concealable existed than a switchblade knife. We were convinced that a determined assailant, armed with a switchblade knife, could cut our throats ear to ear before we ever knew he was thinking about it. With desperation born of youthful impatience, I pushed the combine through an especially weedy patch in the soybean field. I thought I might plug the machine with the greasy, green mass of vegetation, and was not disappointed. The engine groaned as the pigweed slid off the mower into the cylinder. A loud, machine-gun-like noise shook the combine as the main slip clutch disengaged. I slammed the throttle back to idle, leaving the main drive clutch engaged. Sometimes this procedure cleared the machine, but the clutch continued to hammer, although at a greatly reduced rate. Leaving the engine idle and the clutch engaged, I hopped off the platform intent on pulling the plug on through the beast. The machine was hung up on the main drive from the engine itself. I grabbed the main drive belt and gave it a hefty tug. My efforts broke loose the slug of weeds in the cylinder, running my gloved left hand into the main pulley . . . Now my hand was plugging the machine. The clutch started ratcheting again, but not because of green weeds. Every time the clutch slipped, the pulley ate a bit further into my hand. If not for the heavy leather glove, I would have already lost four fingers. Without thinking, I bit my right glove, pulling it off. Instantly my right hand dug into my rear overall pocket where I kept my German Sprenger (switchblade) knife. Snap. The knife was instantly open, using just one hand. I slashed at the rubber belt just as the clutch was getting ready to hit bottom a third time. Slowly it stretched and parted, releasing my still-intact hand. The hand recovered in a day or two, but there still was this price to pay for my foolishness and impatience. A new main drive belt, my brothers reminded me, cost $78. It has sometimes occurred to me that we were irrationally enamored with switchblades. In the fifties, they became the symbol of organization and power projected by street gangs glamorized during the era. Nowadays, these gangs use modern military weapons to duke it out. But when we were younger, switchblade knives were the symbol of allegiance, determination, and commitment of the almost legendary fighting street gangs. ...