Benson Ragnar - The most dangerous game 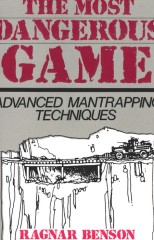 Several compelling reasons exist for writing a second book on the subject of mantrapping. Judging by the number of letters I have received from readers, people are out there putting the information I presented in Mantrapping to good use. There is no doubt that survival-oriented paramilitarists are making day-to-day use of the principles and tactics of mantrapping. Good sales of my previous book on the subject in certain countries in the world (Canada and Australia are two examples) are especially surprising since these nations prohibit the sale or advertising of this type of book. It should come as a shock that most supposedly macho paramilitary magazines and papers in the United States won't carry an ad for Mantrapping, and none of the "blood-and-guts" books are advertised even in the supposedly macho blood-and-guts magazines. Another reason for writing a second volume on mantrapping is that in the intervening years since my first book on the subject, I have again taken quite a few international assignments, mostly in rural, difficult-to-reach places. In many cases, a war was going on in the place I was working. In that context I saw, or in a few cases even used, some new kinds of mantraps that I knew would be of interest to paramilitarists. ...