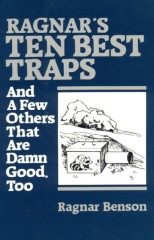 Author : Benson Ragnar
Title : Ragnar's ten best traps And a few others that are damn good, too
Year : 1985

Running a trap line is incredibly hard work. Yet for a lot of farm kids like myself raised in rural America during the Thirties and Forties, it was the only winter source of hard dollars. My brothers and I had a line that eventually ended up being over ten miles long. It took at least one of us from right after we got done feeding the sows and filling the hay bunker in the morning till well after dark to look at every set. But if Dad had more work for us to do on the farm, we skipped some of the sets. Dad was reasonable about our trapping, though. The fifteen or so dollars we made a week had an almost unbelievable impact on our total family well-being. At first light, I would saddle up. Everybody has a different system. I carried a short three-quarter length Hudson Bay axe, a wading pole, and a four-peck pack basket. Instead of taking off my hip boots when I ran the line through the woods, I just left them on and turned them down. That way I didn't have to carry around the extra weight of my leather boots. ...