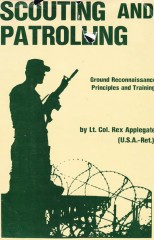 In our present era of the electronic battlefield, it is wise to realize that some aspects of warfare are unchanging. Scouting and Patrolling is concerned with ground reconnaissance principles that have changed little in the past 200 years. Richard Rodgers, leader of the famed Rodgers' Rangers during the French and Indian War, first laid down the tenets of scouting and patrolling for his elite group of guerrilla fighters. These tenets are still the key to winning battles, particularly in the small brushfire conflicts taking place in third world areas. Col. Rex Applegate originally created and compiled this book during WW II. He did so after realizing that our armed forces lacked a field manual explaining scouting and patrolling methods. It is interesting to note that the U.S. Army has since incorporated some of Scouting and Patrolling into their present FM 21-75. However, they neglected to include many of Col. Applegate's most valuable philosophies, observations, and training exercises. ...