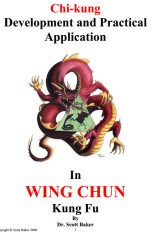 This book is about kung fu, specifically the Wing Chun system of kung fu. Even more specifically, it is about the often mystical or secretive internal Chi-kung skills of Wing Chun kung fu. It is written specifically to those who currently practice Wing Chun, or have an invested interest in Wing Chun kung fu specifically. Kung fu is a term that has become synonymous with Martial Arts in both the West and the East. Even in mainland China today the martial arts are referred to frequently as gung fu (Mandarin pronunciation). Originally the term kung fu was used to refer to any skill or ability that had been developed through persistent effort over time. This understanding is helpful to those who have chosen to embark on the life journey of learning a martial art. Not all systems of combat are as difficult to learn as others, but then not all are as effective as others are either. Wing Chun Kung Fu is one of the most notable, effective martial systems available. When Wing Chun is practiced fully, with its secretive foundation of deep energy skills intact, then it truly becomes a system of skills that require unique and diligent effort over time to master. It is truly a kung fu system in the literal meaning of the phrase, as well as the modern meaning. ...