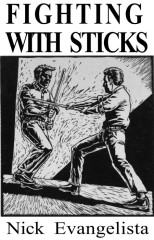 The "Foreword" for Fighting With Sticks was not written by a presently living person. The following lines were penned by an Englishman, C. Phillips-Wolley, in 1920, for a little volume entitled Broadsword and Single-Stick, with Chapters on Quarterstaff, Bayonet, Cudgel, Shillalah, Walking Stick, Umbrella, and Other Weapons of Self-Defense. His thoughts, nearly 80 years old, seemed to be in keeping with the tone of my book, so I decided to borrow a few lines for my readers. Says Mr. Phillips-Wolley: "It seems to me that single-stick is the most thoroughly practical form of sword-play for use in those 'tight places' where men care nothing for rules, but only want to make the most out of that weapon, which the chance of the moment has put in their hands. "As a sport, it (single-stick) is second to none of those which can be indulged in the gymnasium, unless it be boxing; and even boxing has its disadvantages. What the ordinary man wants is a game with which he may fill up hours during which he cannot play cricket (basketball, baseball, football, or tennis for the U.S. citizen) and need not work, a game in which he may exercise those muscles with which good Mother Nature meant him to earn his living, but which custom has condemned to rust, while the brain wears out; again in which he may hurt someone else, is extremely likely to be hurt himself, and is certain to earn an appetite for dinner. If anyone tells me that my views of amusement are barbaric or brutal, that no reasonable man ever wants to hurt anyone else or to risk his own precious carcase, I accept the charge of brutality, merely remarking that it was the national love of hard knocks which made this little island (England) famous. 'There is just enough pain about the use of the sticks to make self-control during the use of them a necessity; just enough danger to a sensitive hide to make the game thoroughly English, for no game which puts a strain upon the player's strength and agility only, and none on his nerve, endurance, and temper, should take rank with the best of our national pastimes. 'There is just enough sting in the ash-plant's (singlestick's) kiss, when it catches you on the softer parts of your thigh, your funny bone, or your wrist, to keep you wide awake, and remind you of the good old rule of 'grin and bear it.'" Finally, "If you want to learn to play quickly, if you want to get the most out of your lessons, never encourage your teacher (or opponent) to spare you too much... If you are not spared too much... you will, after the ash-plant (single-stick) has curled once or twice round your thighs, acquire a guard so instinctively accurate, so marvelously quick, that you will yourself be delighted at your cheaply purchased dexterity." Thoughts on martial skills haven't changed much over the years. ...