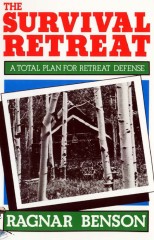 This is not another buy-a-main-battle-tank-and-arm-to-the-teeth book about sustaining a three-day firefight with your neighbors after the collapse. My contention is that guns are one of the last, and probably the least important of the major aspects of defending your retreat. Instead, I have attempted to put together information of genuine practical value that will really teach survivors how to protect their retreats. In doing so, I have drawn heavily on my own experience as well as that of a number of people who have made it through tough, no-holds-barred survival situations. Since no work of this nature could, or should, hold itself out as being the final word, I have also cited quite a lot of current literature. Survivors with some military background will probably not substantially disagree with my basic retreat defense premises. Conflicts, however, will arise when this material is compared with the theories of those quasi survivalists whose volumes of writing often vastly exceeds their on-the-ground experience. I suspect that the main reason some of these people have so many followers is because many Americans want a good excuse to buy a lot of guns. Some of the armament gurus will gladly justify purchasing a whole roomful of firearms ! ...