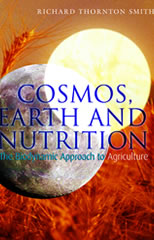 Dr RICHARD THORNTON SMITH was formerly a geography professor at the University of Leeds, specializing in soil science environment and conservation. Widely travelled, he has a longstanding interest in indigenous and sustainable farming. He was introduced to the work of Rudolf Steiner at an early age, although his full involvement with biodynamics dates from 1990 when he began to participate in training programmes and workshops at Emerson College, Sussex. In 1996 he began a biodynamic extension programme in Sri Lanka, for which he published a book, updated in 2007. Since 2001 he has been an inspector for the Biodynamic Association’s Demeter and Organic Certification in the UK. In 2003 he produced an edited selection of Steiner’s work relating to agriculture. He is currently a council member of the Biodynamic Agricultural Association, and lives in Ross-on- Wye Herefordshire. ...