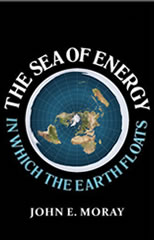 Author : Moray Thomas Henry
Title : The sea of energy in which the Earth floats For beyond the light rays lies the secret of the Universe The evolution of energy and matter
Year : 1960

Introduction. Radiant energy - the term Moray has used to describe that source of energy coming from the Cosmos to the earth and radiating from the earth back from whence it came. This is the energy the Moray device captures and could be described as those particles of energy pervading all space. In the evolution of energy and the evolution of matter these particles of matter and energy (one and the same thing) manifest under certain conditions as pure energy and under others as pure matter. Radiant Energy from the Cosmos, like radiant particles of matter, being composed of an infinitesimal quantity whose behaviors are described by mathematical equations similar to those used for describing electrical waves, keeping in mind to differentiate between wave length and frequence. Radiant- Energy being particles of energy, just as light is wave lengths and particles is comparable to the electron and magnetron; a ring of negative electricity traveling in a vortex with the speed of light. Streams of energy quanta, each quantum having energy and momentum where the electron revolves around the proton at a distance equal to the electron radius. ...