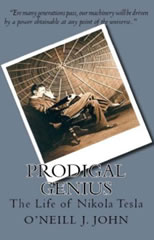 "Spectacular" is a mild word for describing the strange experiment with life that comprises the story of Nikola Tesla, and "amazing" fails to do adequate justice to the results that burst from his experiences like an exploding rocket. It is the story of the dazzling scintillations of a superman who created a new world; it is a story that condemns woman as an anchor of the flesh which retards the development of man and limits his accomplishment--and, paradoxically, proves that even the most successful life, if it does not include a woman, is a dismal failure. Even the gods of old, in the wildest imaginings of their worshipers, never undertook such gigantic tasks of worldwide dimension as those which Tesla attempted and accomplished. On the basis of his hopes, his dreams, and his achievements he rated the status of the Olympian gods, and the Greeks would have so enshrined him. Little is the wonder that so-called practical men, with their noses stuck in profit-and-loss statements, did not understand him and thought him strange. The light of human progress is not a dim glow that gradually becomes more luminous with time. The panorama of human evolution is illumined by sudden bursts of dazzling brilliance in intellectual accomplishments that throw their beams far ahead to give us a glimpse of the distant future, that we may more correctly guide our wavering steps today. Tesla, by virtue of the amazing discoveries and inventions which he showered on the world, becomes one of the most resplendent flashes that has ever brightened the scroll of human advancement. ...