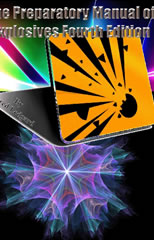 Introduction: a quick lesson in chemistry. Chapter 1 : Introduction to chemistry. The Preparatory Manual of Explosives has been written to teach the art of explosives sciences to the reader. To do this, you should take a quick, yet vital lesson in chemistry. First of all, the world of chemistry is a fascinating world filled with a huge variety of chemicals, chemical reactions, formulas, laboratory apparatus, and an arsenal of equipment. All these elements are combined and used thoroughly to bring about chemical change of matter from one form to the next. In this book, the form of change that we will deal with mostly, is the formation of compounds that posse’s great energy. These compounds that posses great energy, are called high explosives. The world of high explosives is nothing new, but it’s quite unfamiliar to most people. If you were to ask the common man about C4 plastic explosive for example, they would probably say it was something they saw on TV, and it went “bang” with a great fireball. Well, this is not what C4 does or is, and the first rule you should actually learn (before we hit the chemistry), is forget about all the stuff you see on TV and in the movies - TV and Hollywood movies are full of it. Now that we have discussed the first crucial step to full filling the necessary requirement for the understanding of explosives sciences, we should enter the world of chemistry. As previously stated, the world of explosives is relatively unknown to most people, as a result, many of the procedures in this book may seem foreign, or unfamiliar to you - if this is the case, then at this exact moment, you are in the right place. Bye the time you have read this book, these “foreign” procedures will no longer be foreign to you, but in the meantime, lets get started on the world of chemistry. The world of chemistry involves every single aspect, corner, and micro drop of everything that is matter. Our solar system and the entire universe all function on a chemical level - In essence, chemistry is everything. The universe and everything in it is composed of atoms and molecules, and within this massive space, there exists tens of millions of chemical compounds - either known or unknown. The compounds that are known make up only 5% of the naturally occurring compounds, leaving a massive 95% of them being synthetic (prepared in the lab) - all explosives are synthetic. Chemistry has been divided into three fields over the last 100 years to better organize and format the system. The three major branches of chemistry include: Inorganic chemistry, Organic chemistry, and Biochemistry. In short, inorganic chemistry deals with ionic compounds, which make up the chemical compounds that do not contain active carbon. Organic chemistry is the largest branch of chemistry and it deals with covalent compounds, which make-up our everyday items like plastics, drugs, dyes, pesticides, insecticides, resins, fibers, and explosives. Organic means “carbon bearing” which means any compound that bears carbon is classified as organic. Gasoline, turpentine, and candle wax are specific examples of organic compounds. Last but not least, biochemistry studies the field of enzymes, organisms, plants, and animals and their active chemical processes. Genetics research studies the DNA and RNA of living things and is a sublevel of biochemistry. DNA and RNA is composed of organic compounds all linked and actively working together. Biochemistry deals heavily with peptides, amino acids, carbohydrates, ect., ect., all of which play a major role in natural process such as cells, metabolism, and the like. Biochemical processes show a remarkably potential for explosives production in the future, but this technology is radical, and not yet fully developed - meaning that in the future, some high explosives could be produced by living things, and then harvested. Kind of like how morphine is extracted from opium, which is “harvested” on a commercial scale. Note: biochemical processes will not be discussed in this book. ...