Evola Julius - The Yoga of Power 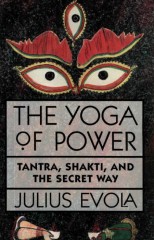 Translated into English for the first time, this book will come as a surprise to those who think of India as a civilization characterized only by contemplation and the quest for nirvana. The author introduces two Hindu movements - Tantrism and Shaktism - both of which emphasize a path of action as well as mastery over secret energies latent in the body. Tracing the influence of these movements on the Hindu tradition from the fourth century onward, Evola focuses on the perilous practices of the Tantric school known as Vamachara - the "Way of the Left Hand" - which uses human passions and the power of Nature to conquer the world of the senses. During the current cycle of dissolution and decadence, known in India as Kali Yuga, the spiritual aspirant can no longer dismiss the physical world as mere illusion but must grapple with - and ultimately transform - the powerful and often destructive forces with which we live. Evola draws from original texts to describe methods of self-mastery, including the awakening of the serpent power, initiatory sexual magic, and evoking the mantras of power. ...