Evola Julius - The Doctrine of Awakening 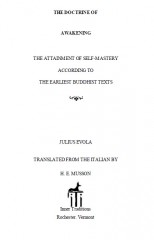 Author : Evola Julius (Giulio Cesare Evola)
Title : The Doctrine of Awakening The Attainment of Self-Mastery According to the Earliest Buddhists Texts
Year : 1943

Preface. In his autobiography il cammino del cinabro (The Cinnabar Path), Julius Evola re-called: "During the last years of the 1930s 1 devoted myself to working on two of my most important books of Eastern wisdom; I completely revised L'uomo come potenza Man As Power, which was given a new title, Lo yoga della potenza The Yoga of Power', and wrote a systematic work concerning primitive Buddhism entitled La dottrina del risveglio The Doctrine of Awakening." The recent discovery of the correspondence between Evola and his publisher allows us to specify the sequence of events and modify it, at least in part. In a letter dated October 20. 1942, Evola wrote to Laterza with a proposal: "It is a new book entitled La dottrina del risveglio. carrying the subtitle Saggio sull'ascesi buddista Essay on Buddhist Asceticism. This is a work that I have almost completed concerning the practical and virile aspect of Buddhist teachings, with particular emphasis on the striving after the Unconditioned. 1 believe that my book's exposition of Buddhist teachings on this basis. explained in a way that everybody will understand, constitutes something original and will be of interest to more than a handful of specialized scholars. After Laterza accepted this project, the final manuscript was mailed on November 30, 1942. It was sent to press in February 1943, and the last revisions were made during the first ten days of August. The book was finally printed in September 1943 during a period of radical political and military upheaval. The author was able to see a copy of La dottrina only after the war was over. ...