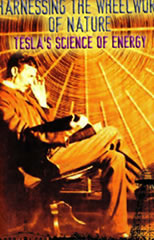 Introduction to Tesla's Science of Energy. Thomas Valone, Ph.D., P.E. It is a great privilege to present this amazing collection of seminal articles, some of which have never been published before, on Nikola Tesla's science of energy. As I'm finishing my Ph.D. thesis on utilizing zero point energy, I realized that Tesla probably acknowledged the same energy reservoir when he referred to harnessing "the very wheelwork of nature." The visionary scientists who have contributed to this anthology offer a collective argument of what Tesla meant by that phrase. Tesla also recognized that an atmospheric and a terrestrial storage battery exists here on earth, just waiting to be tapped for the good of mankind. Therefore, this is the wheelwork of nature that we want to explore in this book. The first section of this anthology offers some historical Niagara Falls material and biographical information about the life of Nikola Tesla with the contributions of William Terbo, the grand-nephew of Tesla, Keith Tutt, author of The Scientist, the Madman, the Thief & Their Light Bulb, and Dr. Andrija Puharich, whose unpublished biographical manuscript is rich with personal insights. Puharich, a Yugoslavian, also develops with great care, the background and unexpected uses for Tesla's Magnifying Transmitter (TMT). The second section is devoted to Tesla's wireless transmission of electrical power, as distinguished from wireless telegraphy for which he is also famous. It is surprisingly practical, even today, as the brilliant minds in this book prove. Tesla was at least a century ahead of his time, however, so people stole his ideas, left him penniless, and ignored his saintly concern for the human race. I pray that as global community consciousness expands in the 21st century, Tesla's ideas about sharing energy with the whole world will be more understood and appreciated. The third and last section has miscellaneous articles about a few of Tesla's less well-known inventions, including the two-rotor belted homopolar generator and an ozone generator. Today we are faced with the consequences of the fateful decision in 1905 by J. P. Morgan to abandon Tesla's Wardenclyffe Tower project on Long Island, once he learned that it would be designed mainly for wireless transmission of electrical power, rather than telegraphy. He is reported to have complained that he would not be able to collect money from the customer in any feasible way. This mercenary attitude by the world's richest man forced the nation to pay for thousands of miles of transmission line wires, just so an electrical utility meter could be placed on everyone's house. Today the U.S. Energy Association in Washington, DC trains representatives from the former Russian states how to reliably do the same in their countries. No one, except for the few great physicists like Drs. Rauscher, Corum, Bass, and Van Voorhies found in this book, has realized that Tesla was very practical when he proposed the resonant generation and wireless transmission of useful electrical power, after returning from his experiments at Colorado Springs in 1900. For example, Professor Rauscher shows that the earth's magnetosphere contains sufficient potential energy (at least 3 billion kilowatts) so that the resonant excitation of the earth-ionosphere cavity can reasonably be expected to increase the amplitude of natural "Schumann" frequencies, facilitating the capture of useful electrical power. Tesla knew that the earth could be treated as one big spherical conductor and the ionosphere as another bigger spherical conductor, so that together they have parallel plates and thus, comprise a "spherical capacitor." ...