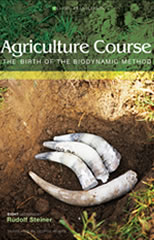 Preface by EHR ENFRIED PFEIFFER, M.D.(HON.). In 1922/23 Ernst Stegemann and a group of other farmers went to ask Rudolf Steiner’s advice about the increasing degeneration they had noticed in seed-strains and in many cultivated plants. What can be done to check this decline and to improve the quality of seed and nutrition? That was their question. They brought to his attention such salient facts as the following: Crops of lucerne used commonly to be grown in the same field for as many as thirty years on end. The thirty years dwindled to nine, then to seven. Then the day came when it was considered quite an achievement to keep this crop growing in the same spot for even four or five years. Farmers used to be able to seed new crops year after year from their own rye, wheat, oats and barley. Now they were finding that they had to resort to new strains of seed every few years. New strains were being produced in bewildering profusion, only to disappear from the scene again in short order. A second group went to Dr. Steiner in concern at the increase in animal diseases, with problems of sterility and the widespread foot-and-mouth disease high on the list. Among those in this group were the veterinarian Dr. Joseph Werr, the physician Dr. Eugen Kolisko, and members of the staff of the newly established Weleda, the pharmaceutical manufacturing enterprise. ...