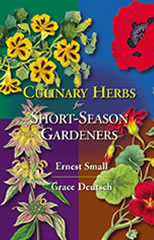 Introduction. short-season gardener n. Optimist who grows plants in an area with summers that are too short and winters that are too cold. Before I met Ernie Small, I had never thought much about the basic problem inherent in growing culinary herbs in my cool-climate garden. Most herbs are native to southern climates, so they resent-at least a little, and sometimes a lot-being required to thrive in a place they find downright chilly. I should have known better. I grew up in semi-tropical Australia, and 30 years after I emigrated to Southern Ontario, I am still grumbling about short summers and endless winters. I really admire my gardening friends in places like windswept Montana, the frigid Adirondacks, and bracing northern Alberta, who persist in creating an annual bounty of flowers, vegetables and herbs. They have learned, often through hard-won experience, that many delectable herbs can be coddled into ignoring their warm-climate origins. These resourceful gardeners exploit the relatively short warm-weather season and encourage a wonderful array of herbs into prospering in difficult, often harsh environments. Dr. Small understands their enthusiasm and persistence. He was raised by immigrant parents in the Ottawa Valley, a region known for its short searing summers and seemingly endless winters. Ernie’s parents got their start in Canada peddling fruit and vegetables from a horse-drawn cart, progressing to owning and operating grocery stores and restaurants. From a young age, Ernie was “volunteered” to help out in the family enterprises, and so unwittingly acquired an appreciation for food plants. But he had little real interest in plants of any kind until he casually took a course in biology just as he was finishing his undergraduate general arts degree. Thanks to his wonderfully inspirational teacher, he fell in love with botany. ...