Rosen Richard - Yoga for 50 plus 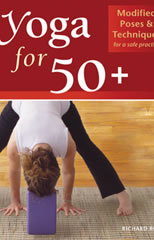 Author : Rosen Richard
Title : Yoga for 50 plus Modified poses and techniques for a safe practice
Year : 2004

Introduction. I turned fifty a few years ago. I didn’t think much about it - that is, until the envelope arrived from the American Association of Retired Persons (AARP). Once you hit the halfcentury mark, Uncle AARP wants you. Uncle AARP’s sudden interest in my age snapped me out of my complacency - or was it denial? Anyway, my first response was, Me, retire? Not in this lifetime. Then I got to thinking about my yoga practice, and how my age had affected it. After some rumination, I realized that a couple of things about my practice or, more exactly, my body, had changed. I was a little stiffer, especially in the backs of my legs. I was also a little weaker: my handstands were quivering after only a minute when before I could hold on for two minutes or more. But my balance seemed okay, as did my endurance: I still started every practice session with fifteen to twenty rounds of Sun Salute. The good news was that, after nearly a quarter-century of mostly regular practice, I was in touch with my body, including its intangible aspects. I might have been a tad looser and stronger when I was forty, but at fifty, I was a heck of a lot more intelligent about my body. My age had adversely affected my body to some degree, but my practice had very definitely softened the blow of advancing age. And I thought to myself, Thanks, Yoga. You may believe that as you age, it’s inevitable that your body won’t work as well as it did ten or twenty years before, and there’s some truth in this. But wait, all is not lost. Most experts agree that you can do something to counter the usual effects of aging, and that something is exercise. Just about any exercise, or combination of exercises, will work wonders. The only requirement is that you exercise regularly, at least four times a week, for about twenty minutes each time. Unfortunately, just when you most need to get up and be active, you might shut down. I’m too old, you might think. Or (pick one), I’m too heavy. It’s too hard. I’m too fragile. I’m too weak. I’m too stiff. It’s too boring. It’s expensive. I’m too busy. I’m too tired. Typically, as we age, we become increasingly aware of, and try our best to avoid risky behavior. But studies suggest that one of the riskiest behaviors is not exercising. And it seems to me that yoga practice is particularly well suited to the task of keeping a person in peak condition. Now, you might wonder whether a person in midlife needs a special book to teach him or her yoga. There isn’t any reason that a fifty-yearold’s practice has to be all that much different from a twenty-year-old’s practice … eventually. At the start, though, you have to pace yourself more slowly than the average twenty-year-old, especially if you’ve been living a sedentary lifestyle, so that you don’t overtax bones and joints, especially the knees, lower back, and neck. ...