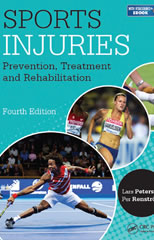 Lars Peterson and Per Renström have co-authored the book Sports Injuries (1977, 1986, 2000, 2016), which is a worldwide bestseller. The authors of this book were awarded the prestigious Duke of Edinburgh Prize, for outstanding contributions to education, clinical and/or research work in the field of Sports Medicine, and in the community, by the Institute of Sport and Exercise Medicine, in a ceremony at the House Of Lords, London, UK, in 2010. Lars Peterson, MD, PhD, Professor Emeritus in Orthopedics, Sahlgrenska Academy, Gothenburg University, Göteborg, Sweden Lars Peterson graduated from Gothenburg University in 1966. During his studies he played football/soccer and ice hockey at national elite level. He became a specialist in general surgery in 1972 and in orthopedic surgery in 1973. He was awarded a PhD in 1974 with his thesis Fracture of the neck of the talus. Lars was the team physician for football/soccer and ice hockey teams for over 20 years and head physician for the Swedish national teams in football/soccer and ice hockey. He has been a member of FIFA’s Medical Committee since 1979 and is one of the founding fathers of FIFA Medical Assessment and Research Center. ...