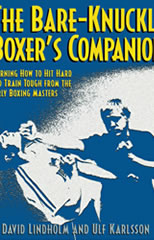 Introduction. This book deals with the European art of fighting by using the hands for striking—the martial art of pugilism, or bare-knuckle boxing. We are not talking about the modern sport of boxing. We are going to deal with something else here; namely how to fight using your hands without gloves, wraps, and other aids. The modern sport of boxing is a tough and valuable practice that certainly has selfdefense applications, but it is an athletic contest, which means it is regulated and relatively safe. Bare-knuckle boxing, on the other hand, is historically speaking a martial art, at least in the modern sense, as well as a sport. It involves slightly different techniques, methods of training, and even perhaps another sort of fighter—similar to the modern boxer, yet not identical. Our book is intended as a how-to guide, a companion of sorts, rather than a discourse on the history of bare-knuckle boxing. We’ve included some aspects of history, because it is important to understand the context of one’s field of study. But our main focus is to extract the practical material from historical bare-knuckle boxing and show how it can be applied in modern self-defense. Exceptionally skilled people who fight with bare hands still exist today. I am thinking of the Irish and the Gypsies, who stand out as the last proponents of the old bare-knuckle art. If you have a chance, seek them out and learn from them and assimilate what is good. Learn what you can from the old masters we deal with in this book, as well from such great boxers as Sullivan, Dempsey, Marciano, and Ali. Fighting unarmed with the hands is a simple concept but a complex skill, too complex to be encompassed by one book, person, or martial art system. Therefore, learn from as many relevant sources as possible. Don’t be fooled by the seemingly quaint, antiquated poses of the boxers in the period illustrations. The fighters of the bare-knuckle era were tough men and skilled combatants. They had to be in order to endure brutal, often bloody bouts that could last for hours. To demonstrate their techniques as clearly as possible, we have adapted their somewhat formal postures. When actually applying bare knuckle in a self-defense situation or during a training session, the action would be much more dynamic. Please remember that a person who trains in bare-knuckle boxing is training to be a hard hitter. Therefore, be responsible with what you do with this knowledge, whether in training or in a real confrontation. ...