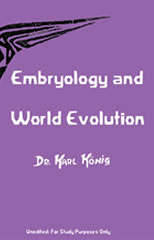 Dr. Karl König was well known in Great Britain as the founder of the Camphill Movement which has established schools and villages for handicapped children and young people here and in many other countries. He lectured several times to the Faculty of Homeopathy, and a number of his medical contributions have appeared in this Journal in translation. Before his death in 1966, he gave six lectures on embryology during two weekend seminars of the Mitteleuro-paisches Studienwerk (Central European Study Initiative) in Freiburg im Breisgau. These lectures were recorded on tape and published in German in a limited edition only lightly edited. Because Dr. König’s work in embryology is of very great scientific importance and should become the basis for re-establishing the validity of the bio-genetic law, we believe that it should be available to a wider readership. We are most grateful for the permission to translate and publish the lectures. Dr. König was a leading spirit within the school of thought founded by Rudolf Steiner and these lectures may also serve to introduce its work in a field of basic importance to the full understanding of Man. - ed. ...