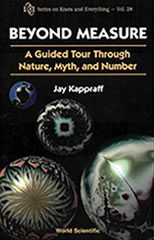 Introduction. Blessed be you, mighty matter, irresistible march of evolution, reality ever new-born; You who, by constantly shattering our mental categories, force us to go ever further and further in our pursuit of the truth. Blessed be you, universal matter, unmeasurable time, boundless ether; You who, by overflowing and dissolving our narrow standards of measurement reveal to us the dimensions of God. Teihard De Chardin. This book has been written as an antidote to the present-daay emphasis on specialization in which knowledge is compartmentalized. Not only are the arts and sciences separated from each other, but even specialists in different scientific disciplines find it difficult to communicate with one another. One consequence of this specialization is that context, passion, and spiritual content are often considered irrelevant. This narrowing of focus has enabled us to probe deeper into ever-narrower areas of study. While this has enabled us to create a world of technological wonders, it has also encouraged us to confuse ends with means. All too often great discoveries are accompanied by costs which outweigh their benefits. Furthermore, despite successes in certain areas of science and mathematics, other areas, particularly those relating to the biosciences and cosmology, have not been amenable to standard scientific modeling. Recently we have begun to realize that our scientific theories and mathematical systems are incomplete, and we have attempted to create new models to explain the otherwise unexplainable. On the other hand, ancient cultures attempted to understand the natural world from their own perspective which may add novel and petviously undiscovered insights into the investigation and analysis of current problems. ...