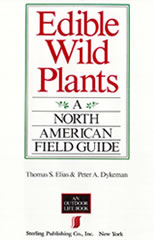 Introduction. How to use this book. This is a season-by-season guide to identification, harvest, and preparation of over 200 of the most popular and common edible wild plants of the U.S. and Canada. Hundreds of related edible species are also noted. In addition, the book covers identification of 20 poisonous plants and notes many other poisonous ones. Neither edible nor poisonous mushrooms are included. Detailed texts, maps, drawings, and nearly 400 photos (mostly in color) allow easy identification. But since there are over 20,000 species of plants to choose from in North America, excluding Mexico, it's important to make identifications with care and caution. The trick is to carefully compare features of the plant at hand against those here. Remember this rule: When in doubt, leave the plant out. We have included edible plants for each season from every major region of the U.S. and Canada, except for the subtropical areas of southern Florida. We have excluded obscure plants and plants that are only marginally edible. Likewise, we have omitted plants that occur in limited numbers or are threatened. Two such plants are the Joshua tree (Yucca brevifolia) and the Saguaro cactus (Cereus giganteus), both slow-growing trees of the southwestern U.S. Rare or threatened species should never be gathered. The book's plant-seeking and identification systems are simple and versatile. In most cases, you'll probably want to begin by consulting the "Seasonal Key to Plants," beginning on page 30. This Key groups plants by primary "edible season," with other edible seasons noted there as well. Within the Key, you can easily hunt up plants in various ways: whether by common or scientific name, by distribution range, by general plant type, by habitat, or by edible optionswhether you have an urge for something boiled, baked, raw, and so on. The more you use the Key, the more you'll like it. On the other hand, you may know a plant's scientific or common name and simply want to learn more about it. In this case, just find its page reference in the Index in the back of the book. Caution: Often, unrelated plants share a common name-from region to region, and from guidebook to guidebook. Thus, it is wise to learn or at least check the scientific names. ...