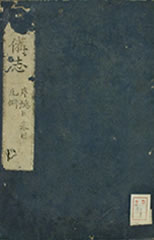 « Wubei Zhi consists of five sections, "Bing Jue Ping", "Zhan Lue Kao", "Zhen Lian Zhi", "Jun Zi Sheng", and "Zhan Du Zai". "Bing Jue Ping" (Commentary on Military Formulae) Containing 18 chapters, this section includes military theories such as those of Sun Tzu, some dating back to the last years of Eastern Zhou Dynasty, more than 1,800 years before the editor. "Zhan Lue Kao" (Consideration of Tactics) This section comprises 31 chapters, and describes more than 600 specific examples of battle that took place between the Eastern Zhou Dynasty and the Yuan Dynasty. Among those are Battle of Maling, Battle of Red Cliffs, which is a classic example of defeating overpowering enemy. "Zhen Lian Zhi" (Record of Formations and Training) This section of the book, of 41 chapters, introduces different ways of training troops including infantry, cavalry and chariots, as well as individual martial arts training with different weapons such as the spear and Dao. "Jun Zi Sheng" (Summary of Logistics) This section is divided into 55 categories, covering a variety of contents related to wartime logistics, such as marching, encamping, troops arraying, transmitting orders, attacking and defending cities, and provision of food, weapons, health care and transportation, to name but a few. "Zhan Du Zai" In this section, with 96 chapters, the author introduces aspects of weather and geographic features that are related to war fighting, as well as traditional Chinese methods of divination, formation, and finally marine navigation. Included into this section is the so-called "Mao Kun map", the unique surviving map representing the Pacific and Indian Ocean shipping routes used by the fleets of Zheng He. » ...