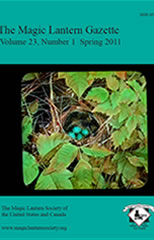 The Magical Effects of the Magic Lantern. The magical effects which owe their origin to the magic lantern, are those which will chiefly occupy our attention; and it will be found that the position of this ingenious instrument in the popular estimation is very far below that which it deserves to occupy. In fact, all those appearances which so much perplex, surprise, or please us in exhibitions of this kind are entirely due to the various ingenious contrivances appended to, or in connection with, this instrument….. Essentially it consists in its improved form of a powerful source of light, of two double convex lenses which concentrate the rays, and direct them upon the picture placed in front of them; and of two other lenses which concentrate the rays after they have passed through the picture, and direct them on the disk where the image is beheld by the spectators. ...