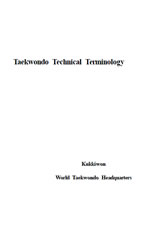 Preface. Commemorating the publication of Taekwondo Terminology... March 1, 2012. Dear Members of the Taekwondo Family. Since the Kukkiwon was founded in 1973, the Taekwondo Textbook has been published and revised in 1987 and 2005 respectively. However, there is still some difficulty in communication within the taekwondo community where technical terminology is frequently used. Due to the lack of coherence and uniformity in the technical terminology, formulating the names of new techniques has not been easy and different people have used different names for the same techniques. In addition, some technical terms are too long to learn and non‐Koreans have difficulty pronouncing them in Korean. On the other hand, the terms for sparring and demonstration have not been regulated, creating confusion among the players and participants. Thus, there has been an urgent need for the standardization of the technical terminology of taekwondo. In order to respond to the demand, the Kukkiwon started to collect and review the technical terms used in dojang (martial art studios) and competition arenas over the past two years and finally selected 138 terms. The outcome of the efforts is now compiled in the present book with the explanation of each technique. ...