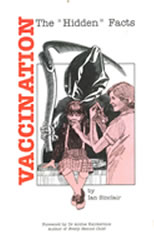 Foreword by Dr Archie Kalokerinos. To immunize or not to immunize is a question that, today, is often asked. To answer is difficult. So much knowledge is required for even partial understanding that one would almost find it necessary to complete a university course in medicine before even the basic facts could be grasped logically. There is, therefore, a need for a comprehensive text on the subject. Ian Sinclair has filled that gap. Like most physicians, I spent my training and early post graduate years totally believing in the miracle of vaccines. I remember, only too clearly, the last polio epidemics that swept through Australia. Several infants, children and adults died under my care. One of my colleagues suffered almost total paralysis. When a vaccine was introduced I almost cried with relief and accepted it blindly. It was the same with diphtheria. I struggled to save a few and lost a few. The suffering of those little children is something I will never forget. Neither will I forget how a tiny boy died in violent spasms due to tetanus. And so I was totally and firmly on the value of vaccines. The first change in attitude came ten years after graduation when I observed that routine vaccinations and immunization made some children sick and could even lead to death. I must stress that this was an observation - not a "theory". So I changed my attitude and realised that children who were ill - even with a trivial cold' should not be immunized. To me this was a simple and important fact . To my surprise, my colleagues not only disagreed, they became hostile - a hostility that killed two infants in the area under my partial control. In this way I was forced to think and study more deeply. What I found was a minefield which was really a conspiracy to hide the truth from the people on this earth. I well remember, some years ago, listening to a knighted medical researcher as he spoke, on the radio, about vaccines. He told two classical stories form the history books. The first concerned Edward Jenner who, according to history, watched as the milkmaid caught cowpox and this protected her from smallpox. So Jenner got some of the ’cowpox’ and inoculated it into someone’s arm - it fostered and the pus was then inoculated into someone else - 100% success was claimed. 100% I! How absurd - complete with all sorts of germs including hepatitis, syphilis and whatever. If one did that today, without antibiotics, the death rate would be huge. Worse still, the genetic make up of smallpox vaccine is known today. It is not cowpox. Where it came from is unknown. Now this does not prove that the vaccine is inefficient. It simply means that the history is wrong. So do not let it be used as a basis for supporting vaccination. Then we have Louis Pasteur and his four dogs. Two were given his rabies vaccine - two were not. On exposure to rabies the two vaccinated dogs survived. The two non-vaccinated dogs died. TRIUMPH!! So it seems, but what rubbish. ...