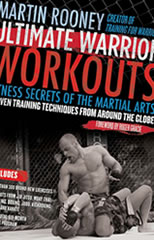 Foreword. For nearly one hundred years, my family has been involved in martial arts, dedicating their lives to Jiu Jitsu and passing that legacy on to the new generations. For us, fighting is not a temporary commitment or a job to make money; it is a way of life. Growing up as a Gracie, there is constant pressure to succeed. From birth you are expected to be a fighter. With both the pressure and the high expectations, combined with the fact that Jiu Jitsu is now practiced by more people on the planet than ever, becoming a champion is not an easy task. Along my personal path in the martial arts, there have been two phases in my training: amateur and professional. During my career, I have trained with, alongside, and under many great people. In terms of my physical preparation for the martial arts, Martin Rooney is the man who showed me the difference between amateur and professional. I began training with Martin at the end of 2002, just before I competed for the first time in the Abu Dhabi Combat Club (ADCC) World Grappling Championships. This was the first time in my life when I realized how important physical preparation was toward achieving potential. Training with Martin not only changed my physique but gave me increased strength, speed, and endurance. Since then, by following his Training for Warriors system, I have continued to physically improve and develop. This system, along with the constant support of my family in our martial art, helped me win the 2005 ADCC in unprecedented fashion by submitting all eight of my opponents, and winning multiple Brazilian Jiu Jitsu World Championships, including the 2009 title, in which I submitted all nine of my opponents. ...