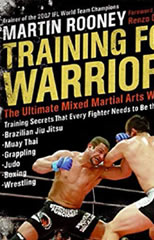 Foreword. Although mixed martial arts may be new to you, this sport has been part of my life for as long as I can remember. Over the last 70 years, members of my family have represented the system of martial arts that they developed in no-holds-barred events against other systems from around the world. In 1996 I left Brazil to spread my family's martial art of Brazilian JiuJitsu to the United States. I started my first academy in New York City, and since that time, my academy has produced champions in the Ultimate Fighting Championship (UFC) such as Matt Serra, in Pancrase such as Ricardo Almeida, and at the Abu Dhabi Combat Club (ADCC) such as Roger Gracie. During the past decade, there have been a number of students that have helped me to advance my art and one of them is Martin Rooney. ...