Roff Andy - Examples and explanations for a Flat Earth 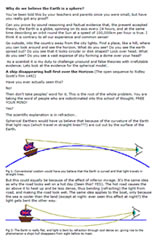 Why do we believe the Earth is a sphere ? You’ve been told this by your teachers and parents since you were small, but have you really got any proof ? Can you prove by sound reasoning and factual evidence that, the present accepted theory, the Earth is a globe, spinning on its axis every 24 hours, and at the same time describing an orbit round the Sun at a speed of 100,000km per hour is true. I think it is contrary to all our experience and common sense! Go outside, into the country away from the city lights. Find a place, like a hill, where you can look around and see the horizon. What do you see ? Do you see the earth spread out ? Do you see that it looks circular or disk shaped? Look over head. What do you see ? Do you see a vast expanse of sky forming a dome over your head? As a scientist it is my duty to challenge unsound and false theories with irrefutable evidence. Lets look at the evidence for the spherical model… A ship disappearing hull first over the Horizon (The open sequence to Ridley Scott’s film 1492) Have you ever actually seen this ? ...