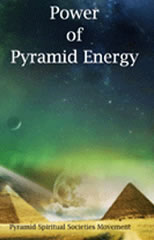 Pyramid Meditation. Man has been building Pyramids since ancient times. One can find Pyramids not only in the Egyptian but Mayan and Incan civilizations too. The Vedas have made references to Pyramid Geometry. The structural design or architecture of a Pyramid inspires more than mere curiosity – awe! Its tough and long lasting design consists of three-dimensional t r i angles, with large bases tapering towards the top of this structure. After thousands of years we still have many Pyramids standing as a testimony to their rightful place in one of the 'Wonders of the World'! Pyramid consists of four faces with an accurate or o 'golden angle of inclination' at 51 50'. Due to this shape, angle and the Earth's magnetic field, the Pyramids receive the highest Cosmic Energy making them the most stable structure and wonderful energy centres. Their capability is defined in their name. 'Pyro' means 'fire' or energy and 'amid' means 'centre' or within; hence, Pyramid is a device with energy at its centre. ...