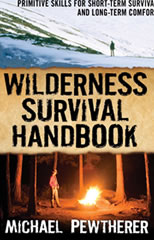 Preface. We loped through the valley, two barefooted, suntanned boys, feeling a true levity of being. We stopped under the spreading branches of a large sycamore tree, and Sylvan reached up and snapped off a dead branch. Where it had broken was a split that he exploited with his knife to make a board of sorts. With another broken branch, a pine knot, some cordage, and a bow, he soon found his hand gliding back and forth with the new bow and drill set. In no time he had a coal glowing and smoking in a cedar tinder bundle that he dropped at my feet as it burst into fl ames. Collecting the bow and drill, he handed them to me with a joyful smile playing on his young face. I knelt down, determination fairly oozing from my pores. I was going to repeat the miracle I had just witnessed. Little did I know then that it would take two years of unguided determination and frustration before I would realize my goal. I was twelve years old. With no books or teachers, I worked on that bow and drill, oft en becoming livid with anger and hurling the set into the woods or across my basement. For some reason I always stopped short of breaking the bow, and never did I leave the pieces of the set where I had thrown them. Instead, I listened to some inner wisdom suggesting that I collect them and leave them on the shelf. ...