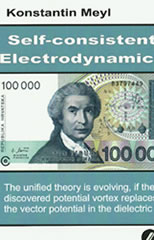 Even though one usually calculates capacitor losses with a complex epsilon it still offends the principle of the constant speed of light. Maxwell's term c2 = 1/e.μ would even entail a physically inexplicably complex speed! With such an offence against basic principles every physicist is asked to search and repair the mistake in the textbooks. In the present treatise vortex losses get in the place of a postulated and imaginary part of the material constant epsilon. With the use of a microwave oven, the welding of PVC foils or capacitor losses are to be explained. The responsible potential-vortices can be derived without postulate from approved physical laws and their existence can even be proved experimentally. Incidentally, the substitution for the vector potential A, which has controlled electro-dynamics as impurity since its introduction blocked the look of a unified theory explaining all interactions and physical phenomena. The new view alone justifies all efforts for rebuilding electrodynamics and removing the built-in contradictions. ...