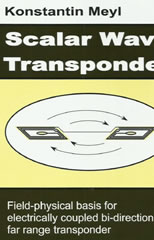 Current RFID technology explains how the transfer of energy takes place on a chip card by means of longitudinal wave components in close range of the transmitting antenna. It is scalar waves which spread towards the electrical or the magnetic field pointer. That provides the better explanation. Using the wave equation proposed by Maxwell's field equations these wave components were set to zero. Why were only the postulated model computations provided after which the range is limited to the sixth part of the wavelength. Meyl in this text proposes instead the rationale for scalar wave components in the wave equation of Laplace. Physical conditions for the development of scalar wave transponders become operable well beyond the close range. Scalar wave information and energy is transferred with the same carrier wave and not carried over two separated ways as with RFID systems. Bi-directional signal transmission with energy transfer in both directions is achieved when there is a resonant coupling between transmitter and receiver. The first far range transponders developed on the basis of the extended field equations are already functional as prototypes. (Prof Dr. Ray Turner). ...