Langstroth Lorenzo Lorraine - Langstroth on the hive and honey bee 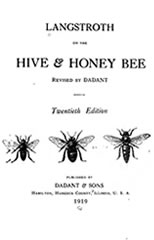 Biography of L. L. Langstroth. Lorenzo Lorrain Langstroth, the "father of American Apiculture," was born in the city of Philadelphia, December 25, 1810. He early showed unusual interest in insect life. His parents were intelligent and in comfortable circumstances, but they were not pleased to see him "waste so much time" in digging holes in the gravel walks, filling them with crumbs of bread and dead flies, to watch the curious habits of the ants. No books of any kind on natural history were put into his bauds, but, on the contrary, much was said to discourage his "strange notions.'' Still he persisted in his observations, and gave to them much of the time that his playmates spent in sport. ...