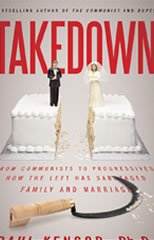 Author : Kengor Paul
Title : Takedown From communists to progressives, How the Left has sabotaged family and marriage
Year : 2015

Fundamental transformation. THAT DISTURBING QUOTATION FROM KARL MARX appears in his Communist Manifesto, an enormously influential work that launched a revolution unprecedented in its destruction. Totalitarian movements that envisioned nothing less than the transformation of human nature were inspired by that book. And where is human nature more elemental than in the family and the marital procreative act that produces it? Even way back then, in the mid-1800s, the far left had its sights on the family, with marriage at the epicenter. And this particular component of the extreme left – the communist left – was devoutly atheistic in its orientation, ambition, and mission. it rebelled against God, a rebellion against the Creator that was central to its new direction and fundamental transformation. Generally speaking, such rebellion is not new at all; it is as old as the old Testament, even as communists had a new, perverse rebellion in mind. The revolt against God is an ancient battle that circles back to the Garden of Eden, where a sinister force first tried to separate man and woman from the will of Divine Providence and tear asunder the male-female union that the Creator had ordained. Fortunately for the long scope and history of humanity, better angels prevailed, as did natural law and common sense, all of which, by practice and experience, enabled civilization to hold the bonds of matrimony and the traditional family together. ...