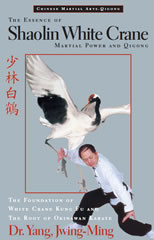 Dr. Yang, Jwing-Ming began his Kung Fu (Gongfu) training in 1961 at the age of fifteen. Under the Shaolin White Crane (Bai He) Master Cheng Gin-Gsao, Dr. Yang became an expert in the White Crane style of Chinese martial arts, which includes both the use of barehands and of various weapons such as saber, staff, spear, trident, two short rods, and many others. With the same master he also studied White Crane Qigong, Qin Na (Chin Na), Tui Na and Dian Xue massages, and herbal treatment. At the age of sixteen, Dr. Yang began the study of Taijiquan (Yang Style) under Master Kao Tao. Later, Dr. Yang continued his study and research of Taijiquan with several masters and senior practitioners such as Master Li Mao-Ching and Mr. Wilson Chen. When Dr. Yang was eighteen years old he entered Tamkang College in Taipei Xian to study Physics and also began the study of traditional Shaolin Long Fist (Changquan or Chang Chuan) with Master Li Mao-Ching. In 1974, Dr. Yang came to the United States to study Mechanical Engineering at Purdue University. In May, 1978 he was awarded a Ph.D. by Purdue. In 1984 he resigned from his engineering career and has since then put all of his effort into developing Chinese martial arts and Qigong in the West. In summary, Dr. Yang has been involved in Chinese Kung Fu since 1961. Dr. Yang has published twenty-two books and twenty-four videotapes on the martial arts and Qigong. His books and videotapes have been translated into many other languages, including: French, Spanish, Italian, Polish, Hungarian, Bulgarian, and Czech. Dr. Yang has also been invited to offer seminars around the world to share his knowledge of Chinese martial arts and Qigong. The countries he has visited include Canada, Mexico, France, Italy, Poland, England, Ireland, Portugal, Switzerland, Saudi Arabia, Spain, Holland, Hungary, and Germany. Currently Dr. Yang is president of Yang’s Oriental Arts Association, Inc., Boston, Massachusetts. ...