Hayduke George - Getting even 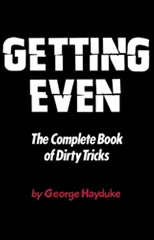 Author : Hayduke George
Title : Getting even The complete book of dirty tricks
Year : 1980

Preface. Jimmy Carter, a president, invited Leonid Brezhnev to the White House for an evening of the usual state activities. As part of the entertainment, Carter invited Brezhnev to sit down at the official White House piano and play a dirge of the Volga or the Fall of Leningrad. As Brezhnev sat down to play, he could not help but notice a red button at the end of the keyboard. Unable to restrain his curiosity, he pushed the button. Immediately, from the ceiling directly above, a large sliding door opened and a huge cascade of water was dumped on the Soviet leader's head. The White House occupants and their staff laughed and laughed. The months passed, and Leonid Brezhnev dried off and licked the SALT in his wounds. It came to pass then that he had occasion to invite Jimmy Carter to the official Red Residence in the Kremlin. After a fine repast, the official Red Square piano rolled in on its half-tracks. "Sit down and play a born-again-Baptist hymn for us," Brezhnev asked gently. As he poised to play, Mr. Carter noticed a small red button at the end of the keyboard. Curiosity was too much for the old Georgia boy, and he pushed the button. Nothing happened. The Kremlin crew guffawed, roared, snorted, and playfully punched one another's shoulders in obvious glee. Carter was puzzled. He appealed to Brezhnev, "Tell me, please-- what amuses you and your staff so much? I mean, there was no water or anything. What is so amusing? Please tell me, so I can share your unique Soviet humor with my fellow-Americans back in the United States." ...