Gatto John Taylor - Dumbing us down 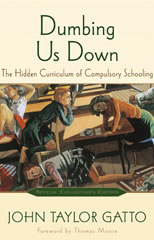 Foreword. Thomas Moore. My father is a born teacher. He’s the kind of man who can spot a potential learner from a distance and go into action. When I was in my forties, he taught me how to bowl at his local bowling alley. In his typical fashion, he said, “Pick up the ball and roll it fast toward the center of those pins.” That’s all. He knew I could learn this relatively simple skill on my own. He believed in what John Gatto calls “self-teaching.” With my father’s blood in me, I’ve been a teacher for forty years and have always loved the role. I learned it through apprenticeship with him. At eighty-eight, having retired from teaching plumbing in a trade school, he taught courses in a local school to adults who wanted to learn how to use computers. I hope I still have that kind of passion in my eighties. But my father has also run up against the hardheaded bureaucracy John Gatto criticizes so explosively. Once, he approached a local school to tell them that, as a former plumbing instructor, he could give a talk to a class of children on where their drinking water comes from, how it’s cleaned up, and where it goes after it’s used. The school thanked him for the offer but told him there was no room on their schedule. ...