Garrud W. H. - Ju-jitsu The japanese art of self defence 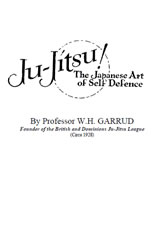 Introduction. There is a notion at the back of most fellows' minds that Ju-Jitsu is "twisting a chap's arms about and making him yell!" That is very far from the truth, and in this series of articles I am going to show readers of MODERN BOY what Ju-Jitsu really is and what it enables you to do. Ju-Jitsu is the Japanese name given to a form of self-defence invented by the Samurai, who were the fighting men of' Old Japan and who kept the art a strict secret for 2,000 years. It has only been known in this country for about twenty-five years! Those Samurai used to defend themselves and conquer their opponents by means of Ju-Jitsu, and not even the biggest and strongest of other Japanese could stand up to them — not even the best wrestlers, who practised a form of wrestling called Sumo. Ju-Jitsu to the Japanese is equivalent to what boxing is to a Briton, and is to-day practised by all fellows in Japanese schools, not only for the purpose of learning how to defend themselves against sudden attack, but also as exercise — for Ju-Jitsu is one of the very best forms of exercise that a fellow can take up. It brings into play every muscle in your body and makes you tough as whipcord and as nippy as a cat! Now for our first "lock." You know how fond some big fellows are of catching hold of someone's wrists and giving them a painful jerk? Here is an excellent method of "putting it across" the bully. Should the big fellow seize your wrists — one in each of his hands — do not struggle and try to pull your wrists away, but just grasp one of his wrists, remembering that you have your hands free. ...