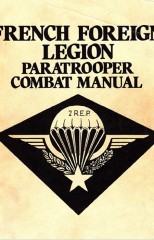 This manual is not the complete textbook on the combat training of Legion parachutists, since the training is continually updated. The translated text is the consolidated parachute company's instruction manuals A Camet de Combat and the pocket guide issued to every Legionnaire parachutist on completion of training in the "4th Compagnie." This manual covers the 2 REP from its origin in Indochina to the present-day 2 REP operations in Africa in which the material from the Camet de Combat and actual combat operations are combined. Also included is the II Division of Parachutist requirements. The 2 REP is the leading element of France's Rapid Action Force, "Force de Frape," or "Strike Force." ...