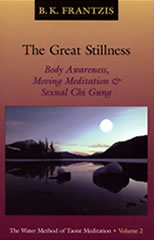 Introduction. When I talk about Taoists throughout this book, I am referring specifically to various individuals that I have met in China and with whom I have conversed in Chinese. These people were completely immersed in the practical living Taoist tradition, practitioners of the various schools and subgroups. Many of these individuals were secretive by nature or were under political pressure and thus requested that their names not be divulged. My reference, then, is to the living traditions of practicing Taoists and not to literary Taoism, which is often commented on by nonpractitioners and academics. The limited number of books available in America on Taoism tend to be filled with abstract descriptions or interpretations of Taoist rituals that never fit together into an integrated whole, or contain impossibly coded and baffling language, such as "the fire which burns the 24 embryonic knots and the 220 knots of the blood," or strange exercises whose rationale is never spelled out. In contrast, in this Water Method of Taoist Meditation Series, I have attempted to convey, in the clearest English I can manage, the practical foundation of the meditation practices I learned in China, especially from the Taoist sage Liu Hung Chieh. ...