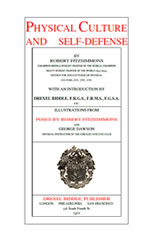 Introduction. Although Robert Fitzsimmons, the greatest fighter the ring has ever had, is world famous in his public life, yet, strange to say, scarcely any but his intimate friends know the actual personality and character of this remarkable man. At his home and among his friends he bears no trace of the ring or of the fighter. A man of temperate habits, and who lives by strict rules for the moral and physical life, the only trait for which his worst enemy can criticise him is that of his unbounded generosity. But even here the harsh critic must pause, for Robert Fitzsimmons is possessed of the keenest powers of perception, and can discern between the worthy and the unworthy with almost unerring judgment. ...