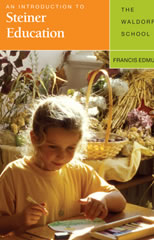 Foreword by Martyn Rawson. It is twenty-five years since Francis Edmunds first published this book, and the Steiner Waldorf Schools movement has changed in many ways in this past quarter century. In view of this it would be justified to ask if such a book is still relevant? What is in many ways more significant is the fact that the world has changed in this time in ways that very few people could have predicted and it is these changes that pose the question: is Steiner Waldorf education itself still relevant? I started teaching about the time that this book was written. As a visiting student I had experienced Francis at Emerson College. For many of us he was already an almost mythical figure, one who represented an inspiring image of wisdom, genius, mystery and charisma - the very qualities we intuitively associated with the Waldorf Class teacher. As a young man with a young family and a serious task in the world (founding a Waldorf school), a figure like Francis Edmunds was not only an inspiration but a standard one measured oneself against. It is not that one tried to be like him, but one experienced qualities in him that one felt were necessary to cultivate. There were others among that group of outstanding personalities of his generation from whom we learned and drew courage. Edmunds, though, had a curious aura. He appeared to have a personal following quite unusual in Waldorf circles. Even today I frequently meet people all over the world who almost immediately on hearing of my work in Forest Row tell me of their time at Emerson College and their memories of Francis (Asian people always say Mr Edmunds of course). It seems like it was a golden time for a whole generation of young people who are now leading lights in the international Waldorf School movement. And that seems to be the crucial point - Edmunds and Emerson College brought Waldorf education to the world in a way that was unique. Something of that uniqueness is apparent in this book. Francis Edmunds had the ability to make complex ideas seem comprehensible. He was a great communicator. ...