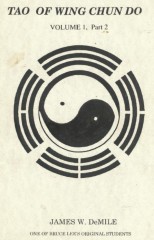 The roots of the Tao of Wing Chun Do go hack over 400 years. Early Wing Chun was developed for two reasons. One was to create a means by which the mind and hody could unite harmoniously through a series of simple and efficient exercises. The second was to create a practical means of defense against the bandits who were common in that area at that time. From this early beginning. Wing Chun evolved to the Shoal in Monastery. Hong Kong and finally to the United States. During this journey. Wing Chun established a series of unique practical, traditional techniques. To this day, these techniques are practiced widl'ly throughout Mainland China and Hong Kong. Bruce Lee. who was an early exponent of Wing Chun. brought to the United States a new concept in martial arts training. lie eliminated the need to follow traditional guidelines and replaced them with creative learning principles. In a short period of time. he was ahle to adapt and modify the basic principles he had previously learned in his martial arts training into what may he termed '"modern Wing Chun". The author, who trained with Bruce Lee in the early 1960's, has his Master's degree in Psychology and his doctorate in Hypnotherapy. In the late 1960's, he combined his interpretation of the modern Wing Chun as learned from Bruce Lee with the modern science of behavior modification. The result of this combination was a dynamic program for personal development known as Wing Chun Do. In the later years of the author's own development, however. he became aware of the limitations of conventional training programs as related to the total development of man . So he expanded Wing Chun Do into a way of life, thus the Tao of Wing Chun Do. The Tao's program helps anyone who is interested in achieving spiritual fullfilment. The program makes the individual aware of his mind-body potential and contributes to his confidence in expanding his ability to handle all levels of social interaction and communication. This confidence allows him to function with more internal harmony and enhance his total spiritual evolution . The Tao believes that the essence of one's being is to evolve his potential as related to daily situations. Rather than to act in servitude to an intangible force, one's energy should be directed towards expanding his limitless potential by eliminating the harriers and restrictions that impede personal growth. The Tao does not inllict either religious or philosophical concepts on the individual. Its only purpose is to offer a variety of techniques by which any individual can become aware of his own thoughts and feelings as related to his personal existence. Unlike other organizations of a spiritual nature. the Tao approaches the spiritual development of the individual in an indirect manner. In this way there is no threat to one's conven tional beliefs. ...