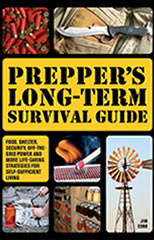 Foreword. In the world of survivalists and preppers, I admit that I’m a newcomer. The year 2008 devastated the economy of my community and left my home state of Arizona floundering, with foreclosure signs dotting the suburban landscape. My family was poorly prepared for a future that I quickly realized was insecure and uncertain. A favorite song from my high school years, “The Future’s So Bright I Gotta Wear Shades,” was replaced by “The future’s so shaky I gotta stock up on canned goods.” In short order, I jumped into the world of food storage, self-defense, and Berkey water filters. That’s where I’ve been ever since as “The Survival Mom.” For some, survival and preparedness are fads, flights of momentary panic or fancy, but for my friend Jim Cobb, they’re a way of life. Jim was a prepper long before Doomsday Preppers made preparedness fashionable, or laughable, depending on one’s point of view. Jim understands that preparing for an uncertain future is something that takes time, research, a bit of money, and dedication. No one gets prepped for a worst-case scenario in just a week or two. There are an awful lot of armchair survivalists and preppers out there. People with plenty to say on any number of survival topics but who don’t live the lifestyle. When the worst comes, whether by natural or man-made disaster, you’ll want a pro, like Jim Cobb, by your side, and you’ll be grateful you heeded his advice. ...